Powers of Attorney: Are Attorneys Entitled to See the Donor’s Will?

Wills can be very personal and sensitive documents. This is one reason why they are treated as confidential, meaning the details of a Will should only be revealed when the person who made it wishes to do so, or upon that person’s death – when the Will is read and its terms put into effect.

Powers of Attorney (such as Lasting Powers of Attorney or Enduring Powers of Attorney) can potentially raise tricky questions in relation to a person’s Will. When someone (usually referred to as ‘the Donor’) makes a Power of Attorney, they grant chosen people (‘the Attorneys’) the authority to act and make decisions on their behalf in certain circumstances. The tricky part can arise when establishing whether the Attorneys are entitled to see the terms of the Donor’s Will. In many cases this will not be an issue. However, where a Donor wishes to keep the terms of their Will private, it can affect the Attorneys’ ability to act for the Donor in the best possible way.

This factsheet examines these issues, from the point of view of Attorneys and of a potential Donor looking to make a Lasting Power of Attorney.

Why might I want or need to see the Donor’s Will?

Your duties as an Attorney involve acting in the Donor’s best interests when exercising your powers. The Donor’s Will may provide vital information to help you do so, especially if the Donor has lost mental capacity and is unable to discuss this with you themselves.

We have additional factsheets which provide information on ‘Acting as an Attorney’ and the concept of ‘Mental Capacity’.

Reading the terms of the Donor’s Will may allow you to:

Janet made a Lasting Power of Attorney appointing Emma to deal with her property and financial affairs. In Janet’s Will, she specifies that her beloved Mark II Jaguar should go to her nephew, Kevin, on her death. Everything else is to go to her daughter, Rose.

Janet later loses the mental capacity to make any decisions for herself and, Emma takes over Janet’s financial affairs under the Lasting Power of Attorney. Emma, who is unaware of the terms of Janet’s Will, decides to sell the Jaguar in Janet’s best interests. Despite being well-intentioned, Emma’s actions mean that Janet’s gift of the Jaguar to Kevin will fail because she no longer owns the car. Kevin would not get the proceeds from the sale of the Jaguar either; these would go to Rose along with the rest of Janet’s estate.

Are Attorneys entitled to see the Donor’s Will?

The standard position is that Attorneys may see the Donor’s Will as long as the Donor has given no instructions to the contrary. Express authorisation in the terms of the Power of Attorney is not required. However, there are some important factors which can change this standard position.

The type of Power of Attorney

If you have only been appointed as an Attorney under a Lasting Power of Attorney for Health and Care, you will not have any entitlement to see the Will. The Donor’s Will relates to their property and finances and so it would be outside the scope of health and care matters.

The terms of a Power of Attorney indicates when it takes effect and the scope of an Attorney’s powers. As mentioned above, a Donor can expressly deny Attorneys the right to see the Donor’s Will. However, terms which expressly allow Attorneys to see the Will are not required.

Essentially, the terms of the Power of Attorney have to be consistent with the idea of using it as legal authority to see the Donor’s Will.

As such, you cannot use the authority of a Power of Attorney to see the Donor’s Will if its terms have not brought it into effect.

If the Donor still has mental capacity at the time you are requesting sight of their Will, the Donor must provide their consent. You will not have authority to look at the Donor’s Will if they refuse their consent.

However, if the Donor has lost mental capacity it is important to check for any instructions they may have made prior to their loss of capacity which allow or refuse you sight of their Will.

The duties of the person holding the Will

Usually, a person’s Will is held by a solicitor. If the Donor’s Will is being held in this way, the solicitors will also owe duties to the Donor, these include duties to keep the Will and its contents confidential and also to act in the best interests of the Donor as part of the client/solicitor relationship.

Alternatively the person holding the Will may be a different Attorney under a separate power, or a Deputy under a Deputyship Order, if so, they will have similar duties to those imposed on a solicitor to act in the Donor’s best interests.

What are my duties as an Attorney when seeing the Will?

If you are granted access to the Donor’s Will, it is important to remember that you will be under a duty of confidentiality in a similar way to a solicitor. This means you must not reveal the contents of the Will to anyone else unless your disclosure has been authorised by the Donor themselves.

Alternatively, if the Donor no longer has mental capacity, you can only disclose the Will or its contents to other people if it is in the Donor’s best interests for you to do so.

What happens when the Donor dies?

Upon a Donor’s death, their Personal Representatives, such as the Executors appointed in their Will, step in to take over handling of their property as part of the probate and estate administration process. Even if you have been appointed as an Executor, you must only act in relation to the deceased Donor’s property when you have received the proper legal authority, such as through a Grant of Probate. You cannot continue acting as an Attorney.

This section is aimed at people who are thinking about making a Lasting Power of Attorney, and are considering whether they wish their Attorneys to have access to their Will.

Should I allow my Attorneys to see my Will?

This may not be a difficult question in most situations; for example, where you have already told your intended Attorneys what is in your Will, or you have also appointed them to be your Executors – in which case they will be the ones putting it into effect after your death.

However, you may have strong reasons for wishing to keep your Will private during your lifetime, even if your Attorneys will ultimately be the Executors of your Will.

If so, you should bear in mind the difficulties which may occur if Attorneys are kept from knowing the contents of your Will, as discussed at the beginning of this factsheet. In particular, the possibility that your Attorneys might unwittingly frustrate some of your plans for passing on your assets. It is for this reason that denying your Attorneys access to your Will should only be done when you are certain it is what you want.

Another aspect to consider is: if you don’t want your Attorneys to know the contents of your Will, have you chosen the right Attorneys? Would you be more willing for your Attorneys to see your Will if you were appointing different people? The Attorney role is a position of trust, so it is important that you pick people whom you trust implicitly.

What can I do if I do not want my Attorneys to see my Will?

As noted earlier in the factsheet, expressly denying your Attorneys the right to see your Will is sufficient to stop the Will-holder from disclosing it to them. This would prevent your Attorneys from seeing your Will whether you had mental capacity at the time or not.

Alternatively, you may want to allow your Attorneys sight of your Will in specific circumstances. For example, if it becomes necessary for them to raise money for care fees from your estate and you do not wish specific gifts in your Will to fail.

Setting out your instructions

There are a couple of ways in which you can set out your instructions. You could:

This approach also causes problems when you only wish to grant access in certain circumstances. The conditions for allowing sight of your Will would also be included in the power’s terms and may have the effect of giving away some or all of the

information you are trying to keep private.

If you are considering any of these different options, you should seek specialist legal advice so that you can be sure your arrangements are best for your unique circumstances. 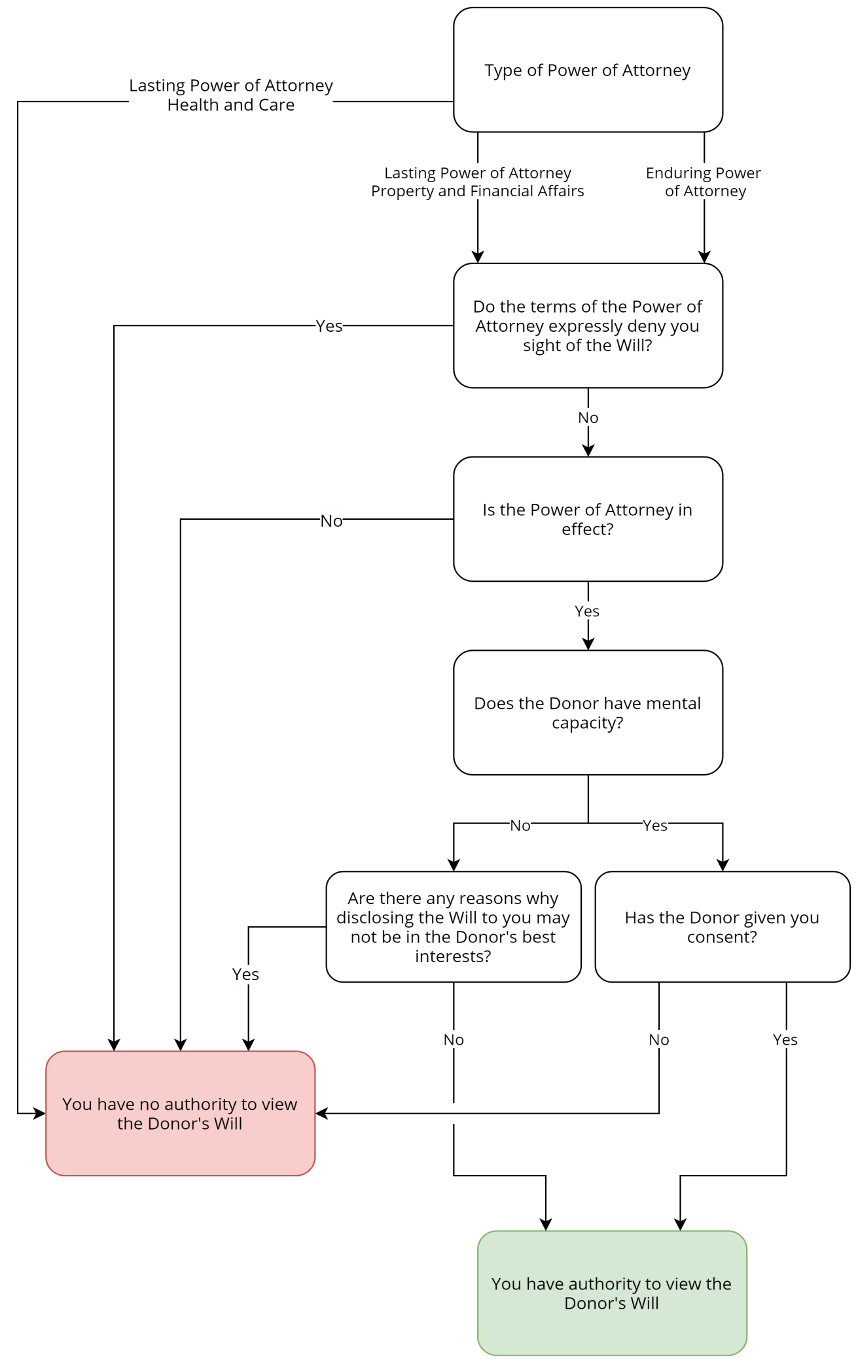 Download this help guide in a a handy pdf for further reading.

Speak with a member of the team

Dealing with legal issues can be confusing and stressful. We understand this, and we’re always on hand to untangle jargon and offer support. Book a free 10-minute complimentary telephone consultation today.

Do Not Resuscitate (DNR) Decisions: Understanding your rights

Decisions over whether resuscitation should be attempted (DNR decisions) can be particularly overwhelming for patients and their loved ones.

Many people consider passing on significant assets to their children or loved ones during their lifetime.

Acting as an Attorney: Your powers and duties explained

If you are named as an Attorney in a Lasting Power of Attorney, then you may be required to make decisions about the affairs of a friend or family member.